Everyone has to have an easy chocolate whipped cream recipe, and this one could not be any easier. This 5-minute whipped cream frosting is delicious on pies, cakes, hot chocolate, and even as a fruit dip.

You will even find out how to make stabilized whipped cream that will hold longer to keep your bakes and desserts looking better for longer.

Whipped cream is a delicious and indulgent treat that you can easily make at home with heavy whipping cream and sugar and it can easily be flavored to suit your needs.

Looking for a rich and easy creamy chocolate topping for your desserts? Then you have to try this chocolate whipped cream recipe!

It is as easy as whipping together heavy cream, sugar, and cocoa powder until stiff peaks form.

You will have a decadent whipped cream to use in no time!

It is great to use on on waffles, crepes, ice cream, French toast, cupcakes, pancakes, and more.

You will never buy store-bought again!

You will love this recipe for chocolate whipped cream because:

Cream - use a high-fat cream like heavy whipping cream, it whips up better than low-fat or half-and-half cream and is ideal for piping.

Sugar - we prefer powdered sugar when making whipped because it mixes quickly into the cream.

Cocoa powder - the type of cocoa powder you use will affect the flavor and color of the chocolate whipped cream.

We used unsweetened Dutch cocoa process powder in this recipe, but you could also use natural cocoa powder or black cocoa powder.

These above types of cocoa powder vary in color and depending on which one you use the chocolate whipped cream may turn out to be light, medium, or dark in color.

Can I Use Sweetened Cocoa Powder?

Unsweetened cocoa powder is made from ground, roasted cocoa beans and has a strong, bitter chocolate flavor. It is usually used in recipes that require sugar to be added separately, because it does not contain any sugar.

Both of these cocoa powders will work in a chocolate whipped cream recipe, but the sweetness will vary depending on which one you use.

It is a good idea to taste the whipped cream mixture as you go and add more sugar and chocolate flavor to your liking.

Step 1 - Place one cup of cold heavy cream, sugar, and cocoa powder into a mixing bowl. If you would like the cream more or less sweet, feel free to adjust the amount of sugar.

What Is The Difference Between Soft And Stiff Peaks?

How Long Does It Take To Make Whipped Cream?

As a general rule, it will take about 5-10 minutes to make whipped cream, and this will depend on whether you are using an electric mixer or whisking by hand.

It's important to use cold heavy cream when making whipped cream. This helps the cream stiffen faster and hold its shape better. So leave it in the fridge until you are ready to pour it into the bowl and start whipping.

Use a chilled bowl

It's also a good idea to use a chilled bowl when making whipped cream especially when the weather is very hot. A cold bowl helps the cream stiffen faster and prevents it from overheating.

Be careful not to overbeat the cream, as this can cause it to become grainy and lose its smooth, creamy texture. Stop beating the cream as soon as you see it reach the stiff peak stage.

Use a high-quality cream

Using a high-quality, high-fat cream will result in a richer and more stable whipped cream. Look for a cream with at least 30% fat content or labeled as whipping cream.

When whipped cream is left to sit for a bit, it tends to collapse and weep.

Stabilizing the cream with gelatin or skim milk powder helps the cream to hold its shape for longer.

Stabilized whipped cream is firmer and easier to pipe into decorative shapes than unstabilized cream making it a good choice for decorating cakes and desserts.

To use gelatin as a stabilizer in chocolate whipped cream:

Here is how you make it:

Here is how to make it:

Both of these methods will help to stabilize the whipped cream, preventing it from collapsing or weeping. The stabilized whipped cream will hold its shape for hours.

This chocolate whipped cream recipe makes about 2 cups and would serve about eight. A serving size is about ¼ cup.

This recipe for homemade chocolate whipped cream has about 123 calories in a ¼ cup serving.

Here are a few ideas for how you can serve chocolate whipped cream:

Whip in any of the following flavors to add variety to this basic chocolate whipped cream recipe:

Refrigeration – Store chocolate whipped cream in an airtight container in the fridge. If stored correctly, it should keep for up to 3 days.

Yes. Whipped cream can become overwhipped if you go past the stiff peak stage, it will deflate and start to look grainy and if you have gone too far it will also split and look watery.

How long does whipped cream last?

Homemade whipped cream is best used on the day it is made. It should be kept refrigerated until ready to serve.

It won't last that long at room temperature and will start to break down and lose shape in a matter of hours and even faster on hot days.

I do hope that you try this chocolate whipped cream recipe. If you do, please come back and leave a comment below because I would love to know how you went. 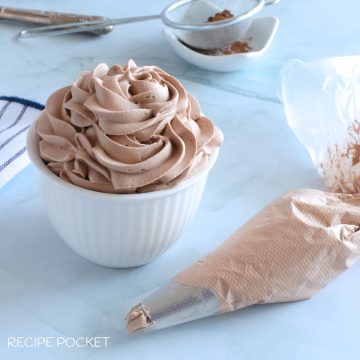