This irresistible coffee whipped cream adds the perfect touch of rich, robust flavor to all your chocolate, coffee, and cinnamon creations.

Made with just three simple ingredients, it is incredibly easy to whip up and elevates any dessert or drink to new heights of deliciousness.

Whipped cream is an irresistible and luxurious treat that can be easily prepared at home with just heavy cream and sugar.

The possibilities are endless when it comes to flavoring your whipped cream.

Try making a rich, creamy cinnamon whipped cream to fill your crepes or a sweet caramel dulce de leche whipped cream as a filling for your pastries.

Get ready to tantalize your taste buds with a heavenly, homemade coffee whipped cream that is sure to satisfy your cravings.

With just a few simple ingredients and very little time, you'll be able to make this mouthwatering topping that will add a taste of deliciousness to any dessert.

It is so easy and satisfying to make!

You will love this recipe for coffee whipped cream because:

Cream - use a high-fat cream like heavy whipping cream, it whips up better than low fat or half and half cream and is ideal for piping.

Sugar - we prefer powdered sugar when making whipped because it mixes quickly into the cream.

Instant coffee - you can use granules or powder - these dissolve into the cream without making it watery like chilled coffee.

Espresso powder is good to use because of its intense flavor, but there is no need to go and buy it if you already have another type of instant coffee.

Step 1 - Place one cup of cold heavy cream, sugar, and coffee granules into a mixing bowl. If you would like the cream more or less sweet, feel free to adjust the amount of maple syrup.

If you are going to pipe coffee whipped cream and want it to hold its shape for longer, whip in 1 tablespoon of skim milk powder for every cup of cream you use.

Chill the bowl and beater

The cream will always whip up better when chilled, so if you are whipping cream on a hot day, place the bowl and beaters in the fridge (or freezer if you have room) for 30 minutes before using.

Having the bowl and beaters well chilled before use will help to keep the cream nice and cold as you whip it up.

What Is The Difference Between Soft And Stiff Peaks?

This coffee whipped cream recipe makes about 2 cups and would serve about eight. A serving size is about ¼ cup.

This recipe for maple whipped cream has about 121 calories in a ¼ cup serving.

There are many ways to serve coffee whipped cream! Here are a few suggestions:

You can vary a coffee whipped cream recipe by adding small amounts of other flavors. You could make:

Refrigeration - Store coffee whipped cream in an airtight container in the fridge. If stored correctly, it should keep for up to 3 days.

Can I use cold brewed coffee or coffee grounds to make coffee cream?

No, do not use cold brewed coffee or coffee grounds to flavor whipping cream.

To give the cream a good flavor, you will need to add a lot of cold-brewed coffee, and because of too much liquid, the cream will not whip up.

Coffee grounds do not dissolve and will make the cream feel gritty.

Take your desserts to the next level with this delicious recipe for coffee whipped cream. I invite you to try it and let me know your thoughts by leaving a comment below. Your feedback would be greatly appreciated. 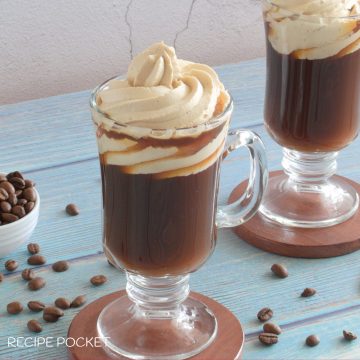 Add a touch of richness and flavor to your desserts with this easy-to-make coffee whipped cream recipe. Made with just three simple ingredients, this whipped cream is perfect for topping cakes, pastries, hot chocolate, and iced coffees. With this recipe, you'll have a delicious and versatile topping that will elevate your desserts in no time.
Print Recipe Pin Recipe Share on Facebook Share on Twitter
Prep Time : 5 mins
Cook Time : 0 mins
Total Time : 5 mins
Cuisine: : Western
Course : Dessert
Servings : 8 x ¼ cup serves
Calories : 121 : kcal
Estimated Cost (AUD) : $2.20 or $0.27 a serve