This easy homemade allspice recipe is a substitute that you can make and use in cooking when you can’t get store bought.

It is a perfect combination of spices that mimic the taste of the allspice berry. Use this allspice recipe as a replacement in recipes that call for ground allspice.

Make this homemade allspice recipe using a combination of cinnamon, nutmeg, and cloves the next time you run out of store bought.

Allspice is a dried berry that comes from the Pimenta diocia tree. It was native in the Caribbean but is now also grown in the American tropics.

The berries are harvested when they are green and unripe. They are then fermented for a short time and then sun-dried causing them to turn a reddish-brown color.

When making your allspice substitute, it all comes down to personal taste.

You can easily adjust the spice mix to your taste by adding more or less of each spice.

This recipe makes one teaspoon of allspice so, make it as needed.

However, if you are making a larger batch, store it in a dry clean airtight container.

Use this homemade allspice seasoning mix for any recipe that calls for allspice powder.

If a recipe asks for a pinch (= ⅛th of a teaspoon) of allspice, you don’t need to make this recipe. Instead, use ⅛th of a teaspoon of ground nutmeg (for savory dishes) or ground cinnamon (for sweet dishes).

Is allspice the same as five spice?

No, they are not the same.

Real allspice is a dried berry that looks similar to a smooth peppercorn.

Its flavor is mixed and tastes similar to a combination of nutmeg, cinnamon, and cloves. Allspice can be used to make sweet and savory dishes. 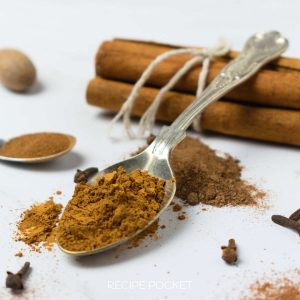 If the recipe asks for two teaspoons of ground allspice double the recipe.
Nutrition Disclosure