Learn how to make golden and crisp baguette crostini with this simple recipe! Fast and easy to make in the oven and are great as party appetizers.

Homemade baguette crostini are crisp, crunchy, and easy to make with just two ingredients. And they taste so much better than store-bought.

Baguettes - you can use fresh or day-old baguettes to make crostini. Choose thin baguettes rather than big fat and plump ones because crostini should be small and eaten in one or two bites.

You could also use french breadsticks - these have a softer crust than baguettes and a slightly fatter but toast up well.

Extra virgin olive oil - gives the toasts flavor and helps to make them golden and crisp when baked.

These plain toasted baguette crostini are delicious as they are and perfect for both savory and sweet appetizers.

But sometimes, you might want to give additional flavor to savory appetizers so you could:

This recipe makes about 30 pieces and one piece is a serve.

Based on our recipe and the size of our crostini, and the amount of oil used we estimate that each piece is about 38 calories.

Baguette crostini are great just as a snack on their own or with a dip.

They are also great as a base for many toppings. When adding toppings to crostini, start with a spread layer before adding other toppings.

You could use a spread like cream cheese, goat cheese, ricotta cheese, soft feta, butter, pate, a thick dip, or other thick spread. These will act like glue to hold the other ingredients in place.

It will also make presenting and eating the appetizers easier because the toppings won't slide off when passed around or when your guests pick them up to eat.

There are so many things that you can use as a crostini topping. Here are a few ideas to get you started.

You could also use these crostini as croutons with soups, put them on cheese boards, or crush them up and use them on salads like Caesar salad.

The crostini can be stored in an airtight container at room temperature for up to four days.

What is the difference between crostini and bruschetta?

Bruschetta is thick slices of toasted or grilled sourdough bread which, are then rubbed with raw garlic while still hot.

Crostini are small pieces of bread brushed with oil and oven-baked until they become crisp.

I do hope that you try this baguette crostini recipe. If you do, please come back and leave a comment below because I would love to know how you went. 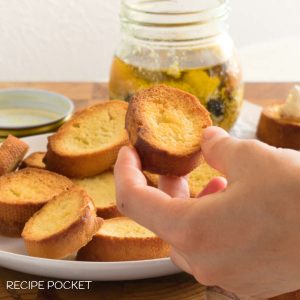 How To Make Baguette Crostini

Make this recipe for crisp and crunchy baguette crostini for your next party appetizers. They are fast to make, and you can add just about any topping you like to them.
Print Recipe Pin Recipe Share on Facebook Share on Twitter
Prep Time : 5 mins
Cook Time : 12 mins
Total Time : 17 mins
Cuisine: : Italian
Course : Appetiser, Snacks
Servings : 30 pieces
Calories : 38 : kcal
Estimated Cost (AUD) : $3.00 or $0.10 per piece