This article “How to Make Naan Bread At Home”, is packed with hints and tips for making the best naan bread ever.

Making naan bread at home doesn’t need to be complicated. This homemade naan recipe is so easy to make, you’ll never want to buy it again. It’s soft, puffy and dotted with dark golden specks just like the ones you get at Indian restaurants.

How To Make Naan Bread At Home

This recipe for Indian bread is so simple to make, all you need to do is combine the ingredients into a stand mixer bowl and let the machine do the kneading.

The dough is then allowed to rest until it has doubled in size. Then divided into 12 even sized balls, rolled into rounds and cooked in a cast iron skillet.

How To Make Naan Bread At Home Without A Mixer

This is a great alternative if you don’t have a mixer. The bread turns out a little denser when compared to the kneaded bread but, I don’t mind either method.

This is a very wet dough, and the dough can be treated as a no-knead recipe.

Place the all the ingredients into a very large mixing bowl, use a wooden spoon and mix very well. Tightly cover the bowl with plastic food wrap, place in a warm area and allow to double in size. Then finish by shaping and cooking the bread as outlined in the recipe.

How to Make Naan Bread At Home – Tips and Ideas

Why Use A Cast Iron Skillet?

The characteristic golden specks that are dotted over the bread is traditional made in a tandoor oven.

What is a tandoor?

A tandoor oven is essentially a clay oven that is fired by charcoal or wood and can reach temperatures as high as 480°C. It is used to cook and bake many different foods.  When used to make naan bread, the dough is slapped to the inside of the clay, the high heat inside the oven makes the dough puff, expand and giving it the distinctive blistered look.

The reason I like using a cast iron skillet is that it is thicker and better at retaining heat than the average skillet, making it easier to control the temperature.

How To Make Naan Bread At Home In The Oven?

Naan bread can be made in the oven, and it can be cooked exactly the same way I do pita bread. I pre-heat my oven to around 200°C, and place three rolled out pieces of dough onto an up-turned cake rack and then place into the hot oven to bake.

I use a cake rack so that hot air will circulate around the bread giving it an even heat all around. The dough will puff and rise in places and will color only slightly with very few if any golden specks.

Be careful not to leave the bread in the oven for too long, otherwise you could end up with crispy naan bread instead. – which, by the way is delicious when brushed with melted butter and garlic powder.

This homemade naan recipe is so easy to make, you’ll never want to buy it again. It’s soft, puffy and dotted with dark golden specks just like the ones you get at Indian restaurants. Totally delicious!
Click To Tweet

How To Make Soft Naan?

From personal experience, to make soft naan bread there are a number of things that need to be considered:

1. The Type Of Flour

Yeast helps the bread rise, so it’s important to ensure that the yeast you use is live and active. If you have any doubts about the freshness the yeast, you can proof the yeast. If you don’t know how to proof yeast, follow the steps outlined on my How To Use Instant Yeast page.

Don’t over knead the dough, you just want it to come together just to the point where it starts looking smooth and lump free. If you are using a stand mixer as suggested in this recipe, knead for about 3 – 5 minutes and no more. If you’ve never kneaded dough in a stand mixer before, you might like to read Tips For Kneading Dough In A Mixer.

The dough needs to be wet and sticky. This dough is sticky and very soft and wet, the high moisture content helps make is soft.

Give the dough plenty of time to rise and double in size.

7. How It Is Stored After Cooking

Another way to keep naan bread soft and warm, is to stack the naan while still hot and wrap it up in a clean tea towel. The steam that is trapped will help keep the naan soft.

FAQ – How To Make Naan Bread At Home

Can You Freeze Fresh Naan Bread?

Yes, it can be frozen, allow the bread to cool completely then wrap tightly in plastic food wrap, place into a freezer bag and seal tightly, don’t forget to label and date it before freezing. It can be frozen for up to six months.

How Do You Keep Naan Bread Fresh?

I find freezing bread is the best way to keep it fresh. Freeze any left-over naan the same day it has been made. When you need the naan, leave it out to defrost, then wrap tightly in alfoil and place in a warm oven to heat.

If you prefer, the naan can be warmed in the microwave oven. For each naan, heat in cycles of 10 seconds until it is warmed – being careful not over heat. Overheating will make the bread dry out and become hard.

Yes, naan bread is healthy. My recipe is easy to make and only 105 calories per serve when eaten plain.

How Is Naan Bread Served?

Naan is traditionally served as a side dish to Indian main meals and can be used as a wrap to a variety of savory fillings.

It can also be used as a pizza base. Can be cut into small pieces, baked crispy for a healthy base for a number of snack type toppings or dips.

The bread can also be eaten plain or, hot spread with melted butter and dusted with garlic powder.

What Goes Good With Naan?

Naan is typically torn into small pieces and used to scoop up food so, any boneless meaty curry, vegetable or lentil style dish will be good with naan. Basically any dish that has a thick gravy style sauce would be ideal, for example: Rogan Josh, chicken tikka masala, sweet and sour Balti Chicken, Balti chicken, mixed vegetable curry and masala chana.

Place all the ingredients into a stand mixer bowl. Using the dough hook knead on low speed (I use speed 1) for 30 seconds then scrape down the sides of the bowl, then knead for 5 minutes on speed 2.

NOTE: The dough should be wet and stick to the sides of the bowl (see picture below). The slightly higher moisture content in the dough will give you a soft and fluffy bread when cooked.

Climate and the flour can affect how your dough will turn out so;

Leave the dough in the bowl scrape the sides clean and shape the dough into a ball, tightly cover the bowl with plastic food wrap and allow to double in size.

Step 3. Knock Back The Dough

Use a scraper to knock back the dough, by scraping down the sides of the bowl and folding the dough in on itself several times before scraping the dough to the a lightly floured bench top.

Use kitchen scales to weigh and divide the dough into 12 even sized balls, about 87 grams each. Roll out and gently pull each ball into 18 cm rounds – being a soft dough it will stretch a little more as you transfer it from the bench to the skillet.

Make sure that the dough is of an even thickness and not rolled out too thin. It needs to be about 3-5mm thick, otherwise is won’t puff and be soft.

Please note: The cast iron skillet I use is about 20cm in diameter and this works out perfect for that size. If your skillet is smaller, consider making the dough balls a little smaller to accommodate the size of the skillet and required thickness of the rolled-out dough.

You want to get the skillet nice and hot before placing the first naan in. When you are ready to cook the naan, turn down the heat to medium and add the first naan, make sure you dust of any excess flour before you do so.

You should see it almost instantly start to bubble and start to puff up, when this happens turn the bread over and cook the other side. You may have to adjust the heat from time to time to prevent burning.

Tip: Avoid burning yourself and, hold the damp tea towel with tongs when wiping the hot pan.

Stack the naan on top of each other once they are cooked and keep wrapped in a clean tea towel until ready to eat.

Now you know how to make naan bread at home! Make these easy curry recipes to go with your naan bread? Try these:

This simple chickpea curry from My Pure Plants, is an easy one-pot dish that’s quick to make. You can have it on the table in 30 minutes making it great for those busy days.

Dum Aloo from my friends at Your Veg Recipe is a popular North Indian curry made with baby potatoes, cooked in a thick creamy onion and tomato gravy, that’s just waiting to be mopped up with a fresh piece of homemade naan bread.

Metric – US Customary
Prevent your screen from going dark

Love to try this recipe for How To Make Naan Bread At Home? PIN THIS to your Bread Recipe board on Pinterest.

Ghee is clarified butter that originated in India. It is used in many Middle Eastern cuisine. Read more here.

Welcome to our blog! 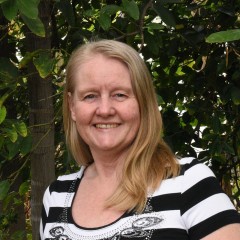 Harriet Britto is the food blogger, recipe creator, and photographer behind Recipe Pocket. A website dedicated to easy recipes that are budget friendly. She prides herself in providing quality recipes with an international flavour that can be easily made and enjoyed at home. Read More…

You can find out more about which cookies we are using or switch them off in settings.

This website uses cookies so that we can provide you with the best user experience possible. Cookie information is stored in your browser and performs functions such as recognising you when you return to our website and helping our team to understand which sections of the website you find most interesting and useful.

Strictly Necessary Cookie should be enabled at all times so that we can save your preferences for cookie settings.

If you disable this cookie, we will not be able to save your preferences. This means that every time you visit this website you will need to enable or disable cookies again.