Poireaux vinaigrette is a simple poached vegetable dish with a vinaigrette dressing. Poireaux means leek in French and this leeks vinaigrette recipe is so easy to make. In France, it is often served as a starter, but we like to serve it as an easy side dish.

Poireaux vinaigrette (braised leeks) is delicious warm or at room temperature. This French leeks recipe is great for serving at dinner parties or as an everyday side.

Please note that below is a guide for some of the ingredients we used in the recipe. The printable recipe further down the page has the complete list of ingredients, including quantities and step-by-step instructions.

If you have leeks that are smaller you may only be able to get one serve from each.

Poaching Liquid – You can use either water, chicken or vegetable stock to poach the leeks in. We like using stock because it gives a nice flavour to the leeks.

You can use homemade or store bought stock and even stock made from cubes or powder.

Vinaigrette – you will need a little red wine vinegar, Dijon mustard, olive oil and salt. You don’t need much as a little goes a long way.

Garnish – The garnish is optional but, it does help to “brighten” up an otherwise dull-looking dish, especially if you are going to serve it at a dinner party.

For the garnish, you will need small amounts of finely chopped shallots (or red onion) and chives or parsley.

If you’ve never cooked with leeks before, read this section on how to clean leeks. You might also like to read this guide to leeks.

How To Clean Leeks

Step 1 & 2 If you are using leeks that have been in storage for a while and have outer leaves that are little brown and dry-looking (like the ones shown in the above image), peel these away.

Trim away most of the green top as this is rarely used in cooking. I like to leave about 5 -10 cm of green leaves at the top but, if you want it can be trimmed down to the white part.

If you are using fresh in-season leeks that look good, all you need to do is remove the green top.

Step 3 – Leeks can be very dirty with dirt being caught in between the white and green parts at the top.

You will need to cut the leeks in half lengthwise at least 5 – 10 cm into the white part at the top, leaving the bottom part uncut.

I like to make one long lengthwise cut, then turn the leek 90° and make another cut. The leek will be cut into quarters but still be held together at the bottom.

Cut a small section from the bottom end to remove the root section.

Step 4 – When you fan the leek apart you will see bits of dirt; this needs to be rinsed off under cold running water. After cleaning, drain off the excess water and then the leeks are ready to be used.

How to Make Poireaux Vinaigrette

Step 5 – For poaching, the leeks will need to be tied together at both ends with twine. This is so that they won’t fall apart during cooking.

If you prefer, the leeks can be cut into smaller 9 cm (3.5 inches) lengths.

Step 6 - After tying the leeks cut into equal lengths.

Step 7 - Place the leeks into a large saucepan and add water or stock to the pot, season with a little salt and or freshly ground pepper.

Bring the stock to a boil, turn the heat down to low, put the lid on, and simmer for about 40 - 50 minutes.

Step 8 - Use tongs to remove the leeks from the stock, transfer them to a wire rack placed on top of a tray to drain and cool. Allow the leeks to cool while still tied with twine.

Cut and remove the twine after you have transferred the leeks to a serving platter and before adding the vinaigrette dressing and sprinkling on the garnish.

Combine the dressing ingredients in a small bowl and mix well.

Arrange the cooled leeks on a serving platter and drizzle over some of the dressing. Garnish with a sprinkling of finely chopped red onion and chives then serve.

What also goes very well with the above is a sprinkling of Asian dried onions (not traditional but a very nice addition!). You might also like to try finely chop or grate over a little hard-boiled egg.

Don’t like vinaigrette you could use one of these as a dressing:

Beuree Noisette is a French brown butter sauce. It is easy to make and with the addition of breadcrumbs, you get a nice crunchy texture which compliments the silky smooth texture of the leeks.

To make - Melt 85 grams (3 oz) of butter in a pan and cook until it turns a golden brown color. Add 4 – 5 teaspoons toasted breadcrumbs, ½ - 1 teaspoon fresh lemon juice, season with salt to taste, and pour over the leeks.

Gribiche sauce is a French cold egg sauce, it’s made by emulsifying hard-boiled egg yolks, mustard, and neutral-flavored oil. After the sauce is made finely chopped pickled cucumbers, capers, and fresh herbs are mixed in.

Hollandaise sauce: is a simple sauce made by making an emulsion of egg yolks, melted butter, and lemon juice (or white wine). It is quite often usually served on eggs Benedict but also goes very well with many vegetables and fish.

What goes well with leeks?

Leeks go well with simple pan-fried, roasted, or grilled meats. They are also delicious when cooked in dishes made with cream and garlic.

Can I freeze leeks without blanching?

Yes, you can but, it’s not the best option. The best method is to blanch before freezing, this will lock in flavor, nutrients, and color.

How simple and easy it that! Poireaux vinaigrette is going to be one of the easiest recipes you will ever make because there is very little that can go wrong with this.

I do hope that you try this easy poireaux vinaigrette recipe! If you do please come back and leave a comment below and tell me how it went. 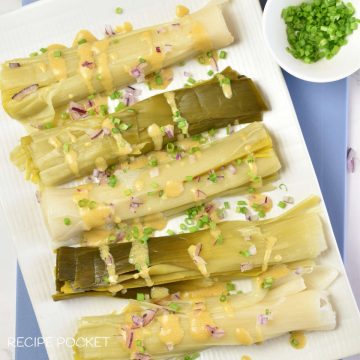 Leeks in vinaigrette (poireaux vinaigrette) is an easy veggies sides for dinner. This very healthy leek side dish is gluten free, vegetarian and vegan. Low in calories but full with flavour, this is simple cooking at it’s best. This easy make ahead veggie sides is delicious warm or at room temperature. This French leeks recipe is great for serving at dinner parties or as an everyday side.
Print Recipe Share on Facebook Share on Twitter
Prep Time : 10 mins
Cook Time : 50 mins
Total Time : 1 hr
Cuisine: : French
Course : Sides
Servings : 4
Calories : 199 : kcal

• Allow about 150 grams (5 oz) of leek per serve. • Thoroughly wash the leeks under running water to remove any dirt trapped between the layers. • Use vegetable stock if serving as vegan or vegetarian. • Prepare the dressing up to 4 days in advance, store in an airtight container in the fridge until needed. Shake well before serving. • If the vinaigrette is too thick for your taste, thin it down with a little of the stock before drizzling over the leeks. • Poached leeks can be stored in the fridge in an airtight container for about 3 days.
Nutrition Facts
Poireaux Vinaigrette (Leek Vinaigrette)
Serving Size
1 x 150 gram (7 oz)
Amount per Serving
Calories
199
% Daily Value*
Fat
11
g
17
%
Saturated Fat
2
g
13
%
Cholesterol
1
mg
0
%
Sodium
118
mg
5
%
Potassium
310
mg
9
%
Carbohydrates
23
g
8
%
Fiber
3
g
13
%
Sugar
6
g
7
%
Protein
3
g
6
%
Vitamin A
2504
IU
50
%
Vitamin C
18
mg
22
%
Calcium
92
mg
9
%
Iron
3
mg
17
%
* Percent Daily Values are based on a 2000 calorie diet.
Nutrition Disclosure
« Tiger Butter Fudge
Puff Pastry Sausage Rolls »